StreetSaw is one of the leading manufacturers of Hoverboards in the world – and with good reason. Their products are high quality, durable, and safe. It also doesn’t help that they dominate a large amount of the Hoverboard market with such a wide array of Hoverboards. Let’s look at the “RockSaw”, their off-road Hoverboard.

The RockSaw Hoverboard is UL2272-certified, meaning it has passed hundreds of industry-standard electrical and safety tests. These tests were designed by New UL, and were implemented as a response to thousands of Hoverboard recalls when the batteries started catching fire and the board “exploded.”

Boards with a UL2272 certificate are safe to ride, as every component and part in the Hoverboard were tested under extreme circumstances and in the harshest environments. (However, keep in mind that most Hoverboard batteries, by design, cannot be charged past maximum capacity – and boards should not be plugged in to charge overnight, otherwise the battery will cause a fire.) 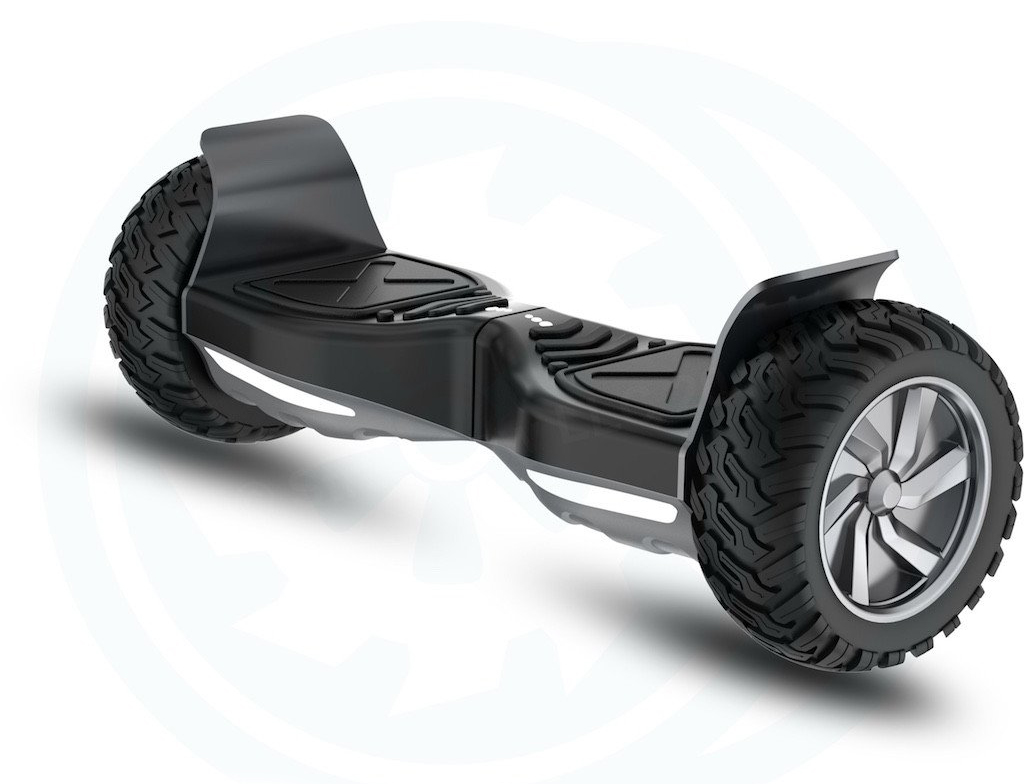 What, exactly makes the RockSaw an all-terrain Hoverboard? First off, the tires are specifically designed/treaded to be taken off-road. (Look at the tires of mountain bikes and compare them to the tires of road bikes. The same theory applies to Hoverboard tires. Off-road tires have rougher treads, and road-only tires are all-around smoother and “neater”.)

Also worth noting about RockSaw’s tires (which goes for all off-road Hoverboards) is their mass: these tires are (by necessity) huge. They’d have to be: otherwise, climbing over rocks an grassy fields, mud and snow-piles, hiking paths and sand… would be a challenge. The RockSaw is all about conquering challenges.

While the sheer “power” of these tires makes them awesome, they in turn are not as agile as their road-only counterpart tires. This sacrifice has to be made, though, as we can’t have everything in life. What this means is simple: Regular Hoverboard tires are generally 6.5” or 8”. These smaller tires make maneuverability, agility and “turning sensitivity” more accurate and easier. When you have heavier (and wider) tires, your turning speed and agility is going to reduce and suffer. (Unless you’re Bruce Lee.)

The reason RockSaw is the “younger” sibling is due to it being StreetSaw’s most recent introduction in its’ Hoverboard line-up. It came out with a bang, however: powered by two 400W motors (800W), the RockSaw is a tremendous beast. However, these watt numbers are the industry standard for off-road Hoverboards, as the added power is necessary for conquering rough terrain. 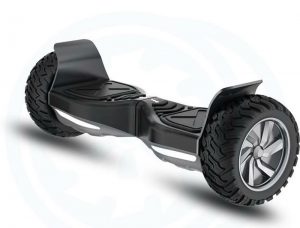 That, however, doesn’t mean the RockSaw is average. No, the Rocksaw can in fact support a person up to 300 lbs. This is a HUGE deal, because almost all other Hoverboards can only carry 260+lbs. For a Hoverboard to carry up to 300 lbs. is nearly a world-wide record (if there were a weight-capacity competition for Hoverboards).

But… let’s take a step backwards and look at some of the cons of the RockSaw. As awesome as this thing is, it’s a heavy piece of machinery. If you don’t mind carrying a staggering 32 lbs. (say, up a hill or through the woods), then by all means do your thing. I personally enjoy lifting the heavier self-balancing scooters and using them for dumbbells. But, sometimes you just don’t want to lift anything at all. So it’s worth keeping this weight in mind if you buy it.

Also worth keeping in mind is its speed: 9-10.5 mph. While this isn’t anything to sigh or frown at, it’s just not the fastest Hoverboard out there – even among its off-road brethren. (Which is understandable, right?) In order to go off-road, corners had to be cut. To have a fast AND light board that handles all terrain? I don’t think we can engineer that type of machinery just yet. So what if the RockSaw is heavy and “slow”? I personally love the fact it can go off-road, through hiking trails and backwood, rocky paths and take you almost anywhere you want.

While we’re on the subject of traveling, let’s talk about distance. The RockSaw can take you up to 12.5 miles on a single battery charge. 12.5 miles is nothing to sneeze at, or laugh about. (Which equates to roughly 5 hours of single, continuous riding.) Plus, when the battery dies and it’s time for a re-charge… Expect to wait anywhere between an hour to an hour and a half. This charging time is among the shortest charging times out there – as the “average” charging time of most commercial Hoverboards is between 2-3 hours. So for a massive board this size to charge in half the time of smaller boards, is a tremendous feat that StreetSaw should wear with pride.

For the night-owls and people who love going out for a midnight joyride, you’ll never have to worry about visibility. The RockSaw comes equipped with LED lights – which are bright, blinding continuous rays that make you visible to oncoming traffic and pedestrians on foot or bikes. (It’s easy to see StreetSaw has the safety and fun of their riders in mind when they make Hoverboards.)

As with anything new, it takes a bit of practice to get used to “using” it. Riding Hoverboards is a bit tricky when you never have before. Luckily, the learning-curve isn’t steep, and there’s a wide variety of how-to tutorials on YouTube at your disposal. Plus, you also don’t have to do much work to guide the board in the direction you want it to. The foot sensors are extremely sensitive and require the most miniscule “direction pressure” from your feet to activate. (This sensitivity is responsible for the penguin-wobbling so many rookies do when they mount a Hoverboard for the first time.)

One of the coolest factors ever to hit Hoverboards is Bluetooth. Yes, the RockSaw is Bluetooth-compatible, meaning you can pair up your Smartphone with it… and listen to your favourite songs as you blast past everyone. (One of my favourite things to do is play the “Jaws” song and ‘sneak up’ behind people walking, for a quick ninja-like sneak shark attack.) In the words of the immortal Dr. Sheldon Cooper, “Everything is better with Bluetooth.”

Also mega-cool is the fact that the RockSaw is water-resistant, meaning you can take it out during a light rain-pour or slight drizzle. (Note: Water-resistant does not mean waterproof. Hoverboards are not waterproof. Never submerge non-waterproof electronics in water.)

Overall, for a [$] price tag, I’d say StreetSaw’s RockSaw off-road Hoverboard is a terrific investment. Nothing beats the amount of raw, pure fun you’re going to have when you buy this board.

You Can Also Try These Amazing Hover-boards As Well: